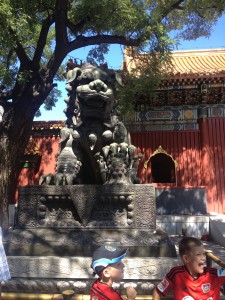 Today I headed for the Lama Temple and the Confucius Temple. It was interesting.

The Lama Temple is dedicated to Buddha. Though Buddha was actually Indian (from India), he became a major influence to Asian culture. There are different factions of Buddhist monks even one who’s more sexual in nature. Nope, I don’t know all of it but I did look for the Buddha of Love and found a few very suggestive pieces. Smiles

The Lama Temple was really crowded. This is the last day of the Harvest festival and everyone was there praying and giving thanks. I learned that you pay homage to Buddha by holding three sticks of incense in your hands. You hold it before you or if you’re more devout, hold it at forehead level and you bow and you give thanks or pray. The Lama Temple was really chaotic and jammed full of people and families.

After the Temple, I walked around a bit along the streets and discovered the Confucius Temple. Now this was a place I really enjoyed. It was very tranquil and it gave off the vibes of being welcomed and feeling like you could just relax and not be in a frenzy as the Lama Temple was. I really loved the vibes here! I actually saw a few people lounging around and relaxing. The Confucius Temple was actually a school where individuals learned—men of course as women weren’t allowed such aspirations. The learning structure was quite intense and you had to pass exams in order to move up to the next level. Here’s a cute little tidbit: the reason why Confucius holds his hands crossed one over the other (as you see in the statue behind me) is because it’s a sign of patience. One hand over the other at stomach level. You know I’ll have to start using that with some people. smiles.

There’s a hall of steles (basically jumbo size stones about 10 feet tall and 6 feet wide—don’t quote me on those measurements). The stones are carved with his 132 (?) teachings or the most important ones you’re supposed to master and recite by heart. Talk about pressure. Though I have to say some of his teachings are very logical and heartfelt. Note to self: must learn more.

After the Confucius Temple, I started exploring a bit and found this amazing As I’m walking the streets of Beijing, I found all these little quaint stores. Since we’re by the Temples, they’re mostly touristy shops. I asked one woman to help me find my driver as my phone reception is none existent and I couldn’t figure out how to use the pay phone. She was very nice and helpful. I’m blessed that I always find wonderful people to assist me when I travel. I also carry my driver’s number with me wherever I go and if worse comes to worse, I have the hotel card that says, “Please take me to my hotel” and provides the address in pinyin and Chinese characters.

Yep, I did find my driver. He was merely a block away at the KFC waiting for me. And yes, they have one of those here. It’s very popular actually as is Subway. (Subway was the only one I saw at the Great Wall). McDonald is popular here but you’ll actually see Kung Fu with a picture of Bruce Lee as the favorite choice for fast food. Though I’m thinking maybe that’s just Hong Kong that Kung Fu eateries were everywhere. I’ve yet to see one in Beijing.

After the Temples we stopped for lunch. Ok, you have to imagine how funny it is to try and order from a picture menu that’s only in Chinese and no one from the restaurant knows English. I did learn that mei fan is rice after much gesturing and writing the word down. Believe it or not, no one in the restaurant had rice on the table. Unlike in the US, in China, rice does not automatically come with your meal. 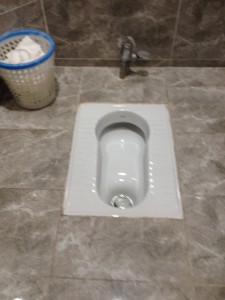 Tidbit to know:  Most people don’t talk about this but you have to discuss this one topic as you will do it daily…often…it’s using the toilet. Though I lucked out last year and always found an American bathroom, this year, I’m going native. The bathrooms are literally on the floor and you squat to pee—if you’re a woman. The trick is to ensure there’s nothing in your pockets that might fall out and grabbing your pants and pulling them out of the away. Once done, you step on the flusher to flush. Nope, they do not have railings for you to hang on. You either balance or curse as you fall over. Laughs. No, it hasn’t happened to me! But I’m sure it’s happened to others, especially if they’re a little drunk. You always want to carry tissue with you as they do not provide it. Unlike Germany, they do not have a bathroom monitor handing out a sheet of toilet paper for 10 fennings a sheet. (10-cents a sheet of total paper—that’s the little squares.) I’m sure it’s more now that price was almost 30 years ago when I lived in Germany. Anyway, always have one or two packets of tissues in your purse and hand wipes. I recommend individually packaged ones as opposed to the ones you can reseal. You’ll use it too often and that reseal doesn’t always work.

Ok, so last item I’ll talk about before I’m off to bed is the porcelain Shards Box

Store. I found the Shard Box Store in the Fordor’s Guidebook to China. It’s on 1 Ritan Beilu in the Chaoyang District. The store is known for taking porcelain which was destroyed during the Cultural Revolution and turning it into jewelry and jewelry boxes. These shards are from the Qin Dynasty—over 100 to 200 years old or older. The owner uses the shards to make jewelry boxes or pendants and even lunch boxes. I figure I purchased one for myself and one for a special someone; instead of a silly silk scarf. I’m bringing them a piece of history! That’s

amazing I think. Yet, I’m an anthropologist at heart so, maybe they won’t appreciate the shard and prefer the silk scarf. Guess I better buy that scarf just in case. Laughs. The symbol on the left for the small jewelry box means Happiness–twice. It’s suppose to be very good luck and during special occasions and weddings, you write it everywhere in your home.

Well, I’m exhausted and off to bed. Though it’s only 9:30pm, I’m waking up at 5am daily. China is 12-hours ahead of NYC. I hope you’re enjoying the Chronicles of China and this amazing adventure with me. Someday I’ll write a book about all my travels, yet I doubt most people would believe half the things that actually happen. Smiles. 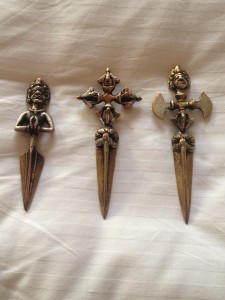 PS: You know I couldn’t pass up the opportunity to get a knife or two while here. Aren’t they beautiful? They’re ceremonial knives and well…they’ll come in really handy. WEG.