Well today I found out that the one day workshop I was hired to perform is actually part of a three day conference which begins tonight. Gotta love the language barriers. Not a problem as I’ve got a wonderful outfit for the red carpet. The group I’m working with actually spared no expense and we’ll have media coverage and recording and over 200 participants coming from all over China to learn from about sensuality from me and from Dr. Eros which is one of the company names they use. I really have to chuckle because when they translated some of the words into English, they used the word “tragedy” when they meant “strategy”. As I’m one of like three people who speak English, and only two that can read it, they’re hoping no else tonight will notice as it’s on a big billboard. Chuckles.

Anyway, we have a big event tonight and thus I figured I’d write my adventure for today before we’re off in 15-minutes for the rest of the evening. At least tomorrow, I’m relaxing a bit and reviewing the material with my translator as the day-long program I’m teaching isn’t until the 16th. Then that night at 11pm I head for the airport to come home.

I’ve already been asked to extend my trip through September 30th as a few other organizations would like me to speak as well, including a few of the Medical Sexologists Associations. However, we may need to leave that till after the New Year as it’s a bit difficult to coordinate.

Chinese Cultural Tidbit: Today I’ll talk about a small tidbit – FANs. Yes, the ways you wave before you to cool you off. In Colonial times in the US and Britain, maiden girls sixteen years younger (prior to marrying age—marrying age was 15) were provided with blank fans. They were then to draw pictures and write words of virtue on their white fans to remind them to be chaste and proper. Thus, every time they opened the fan, they would see the words.

In many countries, women used fans as a way to flirt. A woman could give a potential lover the eye while enticingly flicking the fan faster. Or she could flirt wantonly by opening and closing the fan to certain degrees. She could even show disapproval by snapping the fan closed or completely open. Have you ever noticed that in old movies? Did you ever think to wonder why the “degree of opening a fan” was so important? 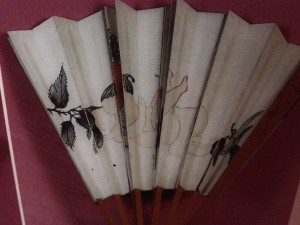 Take a good look at the picture on this fan when it is fully opened (above) then take an even closer at it when it is partially closed. What you see will astound you!

Dr. Ma Xiaonain a prominent Medical Sexologist and Educator in China was kind enough to allow me to photograph this fan which he has in his collection of Chinese sexual artifacts.

Did you see the nude woman with her legs open in the partially closed fan?

I just love learning all these little tidbits about history–sexual history in particular–no one thinks to share nor discuss.

Well all, they’ve come to pick me up early for the opening ceremony. I will have to write a Part II for this day tomorrow.  Hope you’re all enjoying the Blog.