Well, I’ve been stuck in the hotel in Guangzhou for the past two days just working. Got some great work done. Now I’m planning my escape to do a little shopping and go check out the local area.

The internet here is horrible. It takes me over 3-minutes to change from one page to another. No, it’s not my computer. It’s trying to access sites outside China—like my own website. I’ll have to look into a “direct line” from GoDaddy when I return.

BTW zhou means town and so you’ll see it at the end of the word when you’re talking about places. The zh is pronounced like a “j” sound. So zhou sounds like “joe”. Thus you would pronounce it Guang-joe for Guangzhou. On a side note, Guangzhou is in the Canton province which speaks the Cantonese dialect as opposed to speaking Mandarin which is the “national” Chinese government mandated language. Kids start learning Mandarin when they enter school. Thus, they are taught two languages when they’re very young; that of their region and Mandarin. That’s your Chinese lesson for today. Smiles.

Okay, I did make my escape with one of the company owner’s son, Jack. He took me on my first subway ride in China. If you know me, you know I detest the subway and drive everywhere. However, this was such a cool adventure opportunity I had to try it.

In China, you select the location you wish to travel to then you are told how much you will need to pay. It’s like an automated taxi service. Once you pay for your fare you receive a coin which you tap over the reader on the turn stalls to enter. For those of you thinking you could easily lie about your destination to pay a cheaper fee, the government already thought of that. In order to get out of the subway, you must drop your coin into the turn stall that opens the individual gate for you to get out. If you’ve lied the alarm goes off. And if you don’t have the coin to exit, you have to wait for the attendant who will interrogate you as to where your coin is. You might even have to pay a steep fee. Thus, don’t lie and don’t lose your coin.

Much like the train platforms everywhere and the ones in NYC, China has train areas for you to wait. However, in the busy stations, it has rails set up for the exit paths. Also, it has a protective glass enclosure much as you see in the airports when you’re waiting to take their trains. This, Jack assures me, is to prevent people from accidently being pushed into the tracks and oncoming trains due to the mass number of people and of course prevents suicides. 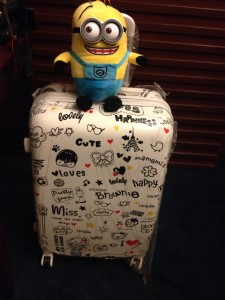 Jack was my guide for the day. Unlike James, Jack doesn’t really bargain. Pity! However, he does love to eat and so we tried a lot of different foods as we shopped downtown in Shangxiajiu market. Just a little bit away from the Changshou Lu metro station. I purchased a few gifts for loved ones and friends. I also purchased a gorgeous playful suitcase that would cost me ten times as much as I paid here. Just $26 for this suitcase. And yes, I priced similar ones in NYC for $225 to $250. One just a little smaller with Felix the Cat on it was $180. Plus, I spotted the minion and had to purchase him. We’re calling him by his Chinese name, xiǎo huángzhǒng nan. Literally translated means, “little yellow man”.

I’m off to bed as it’s already 1:30 and I’m exhausted. However, I just wanted to share that I did receive my two new coins from James. They’re wonderful. Imagi 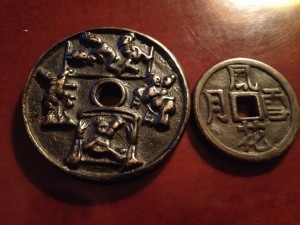 ne, I lost one and gained two. Anyway, I figured I’d share with you what they looked like. Take a close look at the large coin on the top picture. Look familiar? It appears threesomes were popular hundred plus years ago as well. grins…

Stay tuned tomorrow for more sexy info and adventures as I share more of my experiences in China.