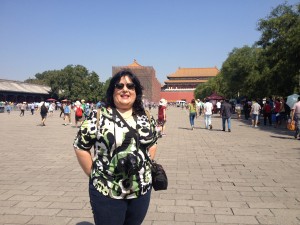 Standing in the center of the Forbidden City

Today was such an amazing day. I say that despite the fact that every day I’ve been in Beijing, China has been amazing. However, today was better than standing upon the stones of the Great Wall at Mutianyu. Here’s way…

Looking at the courtyard of Heavenly Peace

To introduce James, he is a friend of one of the women (Tracy) I am in China to connect with. As I previously mentioned, I am blessed to have such wonderful people around me. James volunteered his time to meet with me and take me around Beijing despite the plumbing disaster he had at home; such a wonderful and loving man. Plus, he’s so knowledgeable about the culture and the Forbidden City. It’s like having my own walking talking encyclopedia. Big grins. Thanks James, I’ll be eternally grateful.

Now back to the story about the Forbidden City.

I discovered so much about the Forbidden City, I’ll just list a few facts below:

After the Forbidden City we drove down to Fahai Temple, in the Shijingshan District. (We picked up Dr. Ma along the way. More about him in just a few minutes.) The Fahai Temple was empty of people. Not many travel to it and even less know about it. I discovered it through the Fodor’s Guidebook of China. A must read if you’re visiting China! If you’re like me, you’ll be highlighting all the places you want to visit while here and discover some amazing locations and little know places to explore. 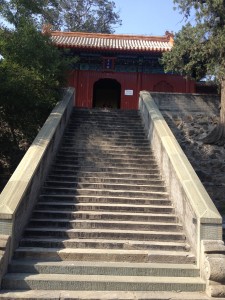 Steps leading to the Fahai Temple. (Approximately 3-stories up)

The Fahai Temple is off the beaten path and a little hard to get to but oh so worth it. The Temple was actually commissioned by Li Tong, a favored eunuch in the court of Emperor Zhengtong (1436-49.) Construction started in 1443. Imagine it is almost 600 years old. And standing in the middle of the inner courtyard are two amazing trees that are both over 1,000 years old. These trees are so breathtakingly beautiful words can’t describe them. The most astonishing part is that this 1,000 year old tree is actually white along over two-thirds of its body as if it has aged from brown to white with time. Much like human’s do with their hair going from one share to gray. The trees have a remarkable pattern of small oval circles in various sizes and shape configurations. Most of all, the tree was soft to the touch. It’s simply incredible! You must experience it for yourself. I had to just sit for a little while with the tree and admire its beauty. Despite there being two trees, I’ll admit, I liked the tree on the left most. Its energy was captivating. 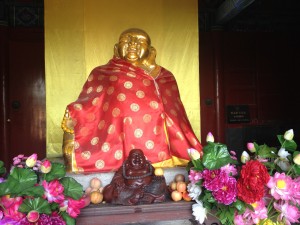 Now before you can get to these 1,000 year old trees, you must walk up the alley where people live. It does seem like the area is poor and not very well kept as opposed to all the touristy places you’ll see in central Beijing. (Remember, this is one of those unknown local secrets. Monks don’t even stay here despite it being a Buddhist Temple.) Anyway, once you truck up the half mile or so (up hill—why does everything have to be up hill?) you come to a great set of stairs and an archway at the top. I had to stop once or twice to catch my breath as I climbed those steep stairs. (A definite sign that I need to get in shape since I plan to return to explore even more of China and other countries as well.) James, bless his heart, stated when I stopped for the second time to catch my breath and give my knees a break, “Just think of this as your way of paying homage to the Buddha as you overcome this difficulty and make it all the way up to the top to see him.” What a wonderful thing to say! And yes, I did muster up all my energy to get up those stairs and was rewarded when I reached the top and stood before the red gated archway. There was the Laughing Buddha smiling happily at me. I felt as if he was smiling down upon me in acknowledgement and joy of my accomplishment.

So why did we go all the way out to Shijingshan District, you might ask? Well it’s because the Fahai Temple is the only place where you can see the Nine Murals in Mahavira Hall which Li Tong had commissioned. And the only way to see them is by flash light as there are no lights allowed in the Hall. Though the Fordor’s book states you’d feel like Indiana Jones as you explore these incredible murals, I have to disagree. I felt like the woman from the movie, The English Patient, when her lover takes her to see the murals at the cathedral and hoists her up into the air with a flare in her hand. Definitely a moment to remember! Now here’s the most incredible ending to an already mind-blowing day; we ended our day with a trip to Dr. Ma’s “Exhibition of Sexual & Reproductive Health” clinic. Dr. Ma is one of the senior board members of the Chinese Sexology Association and has been collecting sexual artifacts throughout China for the past 20+ years. He has placed his personal collection on display at the clinic as he helps educate the people of Beijing. (Ironically, the government allows him to inform the public about sexual health, however he’s not allowed to advertise that the clinic is there nor exists. Kind of like our military policy of “Don’t ask. Don’t tell.”)

The largest penis ever discovered over 3,000 years old and over 4-feet long. Note this artifact is so old there are Chinese Characters craved in it and Dr. Ma has been unable to decipher their meaning. 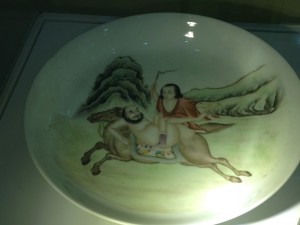 Notice the woman is holding a flogger while having intercourse with the man. Over 100 years old;   Qing Dynasty–Kinky

I hope you enjoy the few pictures I’ve provided. I will be posting more once I return to the US as those are on my camera and I don’t have the software to transfer them over. Most of all, email me if you are interested in helping bring this collection to the US.

Well I’m off to bed as tomorrow is my last day to explore Beijing before I head to Guangzhou. James has promised to take me on a search of sexual artifacts. I’ve been starting my own collection over the past fourteen years. I’m nowhere near Dr. Ma’s priceless collection of over two hundred pieces of sexual history, but hope to someday have an exhibition hall of my own to share with the world.