That white backwards “L” you see on the right side of my head is actually the wall as it stretches out up the mountain and makes a left turn.

Today I went to see the Great Wall in Mutianyu which is about an hour outside of Beijing from where I’m staying. Lucky for me, I have my own personal driver since getting to many of these locations are mind boggling.

It was a little rainy today when we headed out to the Great Wall and I figure that’ll be great since it’ll give the wall a “misty foggy” appearance. As I’m asking the driver for an umbrella, he looks at me like I sprouted two heads since w

e already know, we can’t understand each other. But I am learning, so I said da yu (4th tone on the “u”) which means heavy rain or literally translated—big rain. He smiled, opened the trunk and showed me two big umbrellas. Now we’re both smiling.

As we’re driving to the Great Wall, I notice the traffic lights have a countdown to let the driver know when it’ll change. I also discovered that when there’s a traffic jam, drivers will drive on the shoulder or emergency lane to bypass the traffic. I started laughing when I saw a bus zooming by on the emergency lane. Apparently many people do it; kind of like we cut in front of the line at exit ramps when we can.

Courtesy of one of the postcards purchased. Full copyrights belong to them but I can’t figure out how to read the Chinese info.

that’s just getting up to where the bus picks you up so you can take the cable car up the mountain. You can walk up the mountain to the Great Wall, it’s about a three mile hike, all up hill. Hell, I was winded just going up the first half mile. And they’re still building up the complex so you can appreciate the Great Wall even more. They’re building a stoned pathway up the mile to where you’d take the bus to the cable cars. And of course, there are shops lined up all along the corridor. 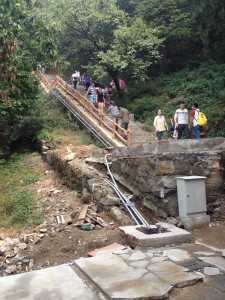 Some of the sellers can be very pushy and will actually try to trap you in their vending area. It happened to me. One lady lured me with a nice blouse then she wouldn’t let me leave—I mean that literally. She actually grabbed my arm and wouldn’t let me walk away from her when I told her I didn’t want the blouse she offered and the price was too high. She demanded I counter her offer. I thought that if I merely stated a really low price she’d let the matter go. She didn’t. She wanted 680 RMB (or yuan—Chinese currency) and I offered 100 RMB. She tried to negotiate with me despite me politely refusing. She even yelled at my driver when he tried to intervene. It got to where I had to push her a bit to get her out of my personal space and adamantly told her “NO!” and walked off. She actually pursued me further down the walk and offered the same blouse to me for 50 RMB. I took the blouse and paid just so I could get rid of her. Of course, she again yelled at my driver once more before we could get away from her.

Another merchant was more fun and thought I loved his stone edging portrait, 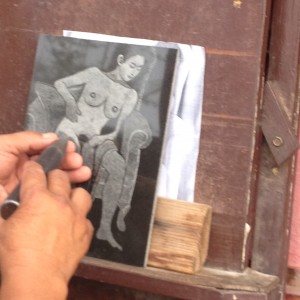 he wanted more than I was willing to pay; 680 RMB. That’s approximately $125. (As I re-read my comments here, I see the prices were the same. I wonder, if they all choose the same price?) We haggled a bit and it was fun. He was so animated with his haggling. He was like the people you see on TV in those bad Chinese movies. He’d throw his hands up in the air and declare, “No. No that’s too low. You’re killing me.” Then he’d run his finger along his throat as if cutting it. I did want the piece, it was beautiful but when he refused my offer of $50, I walked away. I did get a picture though. 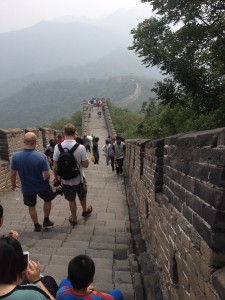 Ok so now about walking the Great Wall…here’s my thought…if I had to run from one tower to the next…well, it’s just not happening. It’s like a 3-mile hike from our tower #14 to the next one and as I’m looking at all the steps, I figure…nope I’m just sitting down now. You need months on a stair master to walk this thing. It’s not so hard going down, but coming back up…aaaaaah. Ganghis Kong would have had no resistance from me. I would just stand aside and see how well he could climb that wall. Laughs.

I must say, the experience of standing among the Great Wall was humbling. To know of it and read about it just doesn’t compare to actually walking it’s stones and staring out to see the wall stretch out for miles winding its way up the mountain sides. The word majestic comes to mind. Never used that word before to describe an experience but yeah…the Great Wall of Mutianyu was definitely majestic! And to think, this was just one section of it.

We finally stopped for lunch at 3:30 pm at a side café along the highway on our

way back. It was a great little café. The really cool part was that you literally fished for your meal (if you ordered fish.) They had a fish pond and you stood there with a bamboo pool with a fishing line (no reel or anything fancy) and you fished. Then a guy would help you pull it in with his net and he’d cook it up for you right there. The kids loved it. I loved watching everyone. And the food was extraordinary. I just told the man what I wanted and he brought me the most amazing dishes. There was plenty to take home for dinner.

Tomorrow I’m heading for the Lama Temple and the Confucius Temple. Plus, I want to go to the Shard Box Store they mentioned in the Fordor’s guide to China. It’s a place that “makes jewelry boxes fashioned from the shards of antique porcelain which were smashed during the Cultural Revolution in accordance to the law.” That’s an amazing thing don’t you think.

How someone destroys a “symbol” to make themselves feel invincible is beyond me. Much like the Christians did to the Sphinx and many of the Egyptian statues; they bore holes into the faces for those they couldn’t destroy completely. But that’s another story and a different adventure. You’ll have to ask me about it sometime. That was a spectacular moment in my life and my son got to share it with me. I’ll leave it at, my son and I were the first mother and child to enter the Great Pyramid for the new millennium; for 1000 years, no one else will be able to claim that honor.

Okay, I’m tired and off to bed so I can be well rested for tomorrow’s trip.